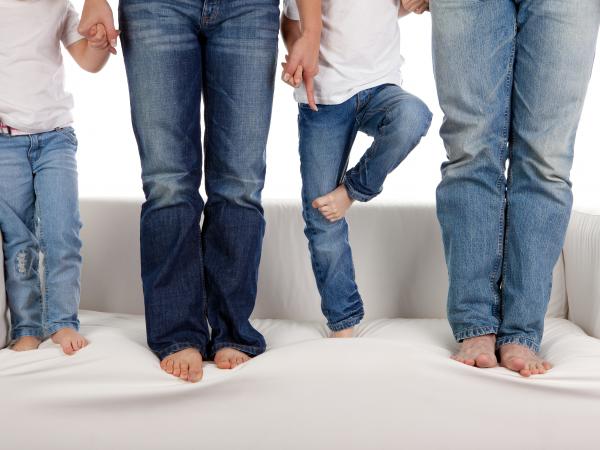 Did you wear blue yesterday?  Yesterday was the second Li Fraumeni Awareness Day – a chance to raise awareness of the rare genetic cancer condition called Li Fraumeni Syndrome (LFS). People were encouraged to #WearBlueForLFS and to use the #LFSAwarenessDay hash tags on social media, including posting pictures of themselves dressed in blue.

Individuals and families affected by this inherited syndrome have enormously heightened risks of developing one or more cancers. It’s also a very rare disease – which is why having ‘awareness days’ is so important.

As you might have guessed, there is a very personal aspect to this interest in LFS outside of my work at the Anticancer Fund. My own family has been deeply affected by this condition. I lost my first wife, Gina, to ovarian cancer just before her 30th birthday. Less than a year later my son George developed his first cancer – he was two-years old when diagnosed with a soft tissue sarcoma. He was finally diagnosed with LFS, caused by a mutated TP53 tumour suppressor gene, after developing his third cancer – which took his life when he was 17 years old. The UK LFS advocacy organisation, the George Pantziarka TP53 Trust, is named in his honour and we work hard to support people with LFS and to encourage research and access to treatment.

A major trial for the biggest step forward

This year we have had some great news to share on LFS Awareness Day. In the last 12 months things have changed enormously with two stunning projects getting funding approvals. The first is for a randomised clinical trial in adults with LFS to see if the anti-diabetic drug metformin can reduce the risk of cancer developing. For people with LFS the lifetime risk of cancer is around 90% - being able to reduce that will save lives. It would be the biggest step forward in LFS since the syndrome was first discovered.

Metformin, a widely used drug and also a prime drug repurposing candidate, has been shown to reduce cancer incidence in mice with LFS. Now we need to see if that works in people too. The MILI trial is a world first and will be run by Professor Sarah Blagden of Oxford University.

And, there is more

The second major step forward is a project that will look at changes in the cells of people with LFS to see what changes are taking place over time, and to see how it relates to cancer initiation. The project, LiFTS (Li Fraumeni over Time Study), is being run by two groups in Cambridge. The collaboration between the Sanger Institute, led by Dr Raheleh Rabari, and the European Molecular Biology Laboratory - European Bioinformatics Institute (EMBL-EBI), led by Dr Isidro Cortés-Ciriano, has been funded by the Medical Research Council.

These two projects fundamentally change the landscape of research in LFS – with the potential to reduce cancer risk and to learn more about the basic biology. It is also great that the George Pantziarka TP53 Trust will be playing a central role in this work – it means that the LFS community are involved as partners, not just as subjects for research.

More on the George Pantziarka TP53 Trust can be found here.

Discover more about our work in drug repurposing here.